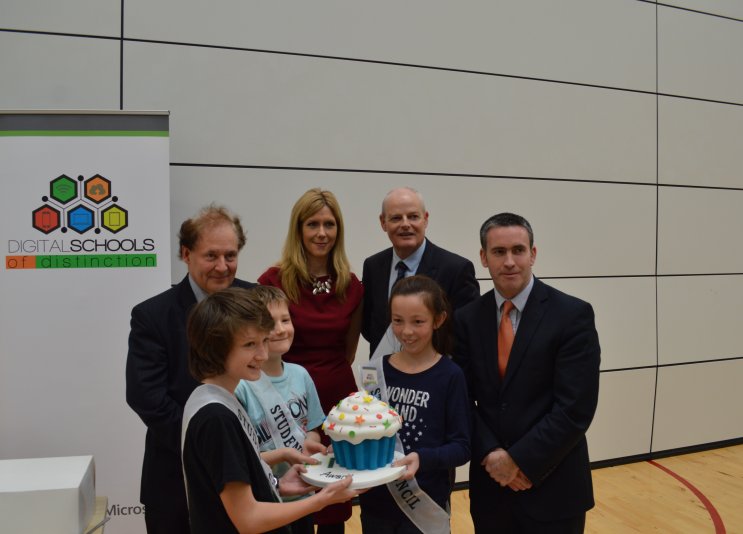 Holywell Educate Together N.S. Swords has been named a ‘Digital School of Distinction’, and joins a growing group of primary schools nationwide to receive the prestigious award.

Minister for Skills, Research and Innovation, Damien English TD presented the award to teachers and pupils at the school today. Supported by HP and Microsoft and launched in September last year, ‘Digital Schools of Distinction’ is a flagship award programme which promotes, recognises and encourages best practice use of technology in primary schools.

More than one in three Irish primary schools – a total of 1,100 schools - signed up to become ‘Digital Schools of Distinction’, in the first full school year of the programme. The programme aims to sign up a further 750 schools during this academic year.

The programme is supported by HP Ireland and Microsoft Ireland who have confirmed that they will support the programme with €200,000 in funding for its second year.

Primary schools who achieve Digital Schools of Distinction status this year will receive a range of ICT supports, including free printing for a year via a HP OfficeJet Pro printer and a monthly printing allowance of 250 colour pages and 2,500 black and white pages, Microsoft software and educational apps as well as technical support and access to education ICT specialists.

137 schools have already been awarded Digital School of Distinction status and it is expected that a further 300 schools will be recognised during this academic year. Plans are also in place to expand the programme into Northern Ireland and the UK in 2015.

Speaking at the event, Minister Damien English said: “The Digital School of Distinction programme provides recognition to schools that have embraced